Whatever you have learned or received or heard from me, or seen in me—put it into practice. And the God of peace will be with you.

Growing in Faith Through Annual Giving

Rick Francis shares why he pledges to Grace: 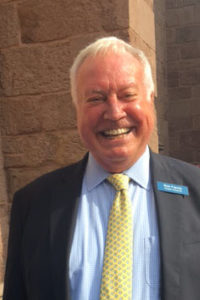 I give annually to Grace Church because Grace Church is home, and family, to me. Our homes need constant upkeep and care. During pandemic days, even when the church was locked up tight, Grace was still here on Zoom, and when we could get back to live services, the services were streamed on Vimeo. The doors may have been locked, but Grace was still here, and here for us. But whether we are at Grace in person or online, expenses do not diminish. Salaries still have to be paid. Expenses, like electricity, phone and internet, and insurance, still have to be paid. Rain, ice and snow don’t care whether we are actually attending in person, and we have to protect our Grace home from the havoc that storms can cause.
Our wonderful music is what brought me to Grace in the first place, and it is what has kept me here. We are so blessed by Paul Olson and our choir. We are also blessed with the extraordinary preaching by all of our clergy – everyone from the Rector to our seminarians. The outreach by Grace into the community is another blessing. This outreach gets better, and more wide reaching, all the time.
We, the parishioners of Grace, need to support all of our blessings. Like our own homes and families, Grace Church could not exist without our constant care, and our financial support.

Parishioners Rachel and Evan Cook tell us why they pledge: 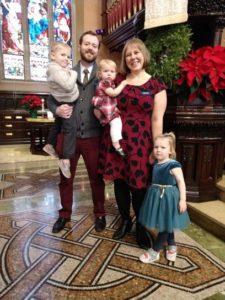 Grace has a Roll of Honor tucked away on a wall in the back of the sanctuary. It lists the names of Grace parishioners who served in World War I. We’ve often looked at that list of names and been humbled by the thought that more than 100 years ago, those people sat in the same pews where our family sits today. Even more humbling is the thought that the church was already at least 65 years old when that Roll of Honor was placed on the wall. But Grace Church is more than just a historical building — it is a living congregation, and it persists and thrives because its parishioners have passed its stewardship lovingly from each generation to the next.

We have been attending Grace for seven years. Those seven years already feel like a lifetime (probably because we now have three kids and can barely remember what it was like to attend the “adult” service), but that time is really just a blip in the church’s long history.  Grace was here before us. We give faithfully to Grace to ensure that it will be here after us.

James Newton, one of Grace’s newest members, shares why he has decided to pledge: 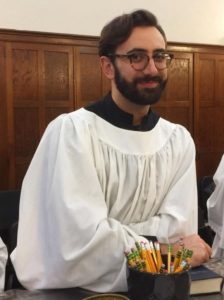 I’ve been attending Grace for just over a year now, having first come at the end of September 2019. I grew up singing in my parish choir and after a few years’ hiatus for college and teaching abroad, followed by my move to Brooklyn in 2017, I began to feel an itch, a rootlessness. I went up to Paul following the service, showed up to rehearsal that Thursday, and the rest is history!

My experience at Grace, short though it may be, has been so rich. There was something intimidating about seeking out a spiritual home for myself for the first time as a young adult and I feel so blessed to have been steered here. At lunch around the corner one Sunday with members of the choir and parish, the conversation turned to engagement, and other matters pertaining to Grace, among them pledging. I felt moved to ask, having never quite considered it or received guidance on the subject, “When is it normal to start pledging?” The reply I received from the group couldn’t have been clearer, more insightful. “When it feels right. Just asking that question is kind of an answer in itself.”

This was prior to March when our familiar days began to unspool. Since then, through the various forms of Zoom worship and having the privilege to return to the sanctuary a few times, my love of Grace has continued to swell. I pledged for the first time in my life last month and it felt so powerful to commit myself to Grace and the important outreach it supports in the greater community. Like the flipping of a switch, this transition marks for me the beginning of a more established connection to this amazing community, and my desire to empower it through thick and thin. Those roots I longed for now grow more deeply in rich, fertile soil.

Abagail Nelson shares why she, husband Grant (Smith), and their children Mikaela and Vita pledge to Grace: 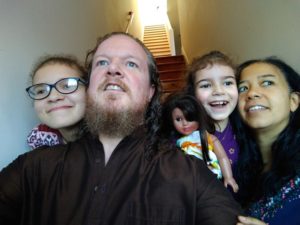 We love Grace Church and have pledged in 2021 because Grace is a community of warm and compassionate people genuinely open to every age and stage of life’s spiritual journeys. Each ministry feels held and bolstered by many hands. We know we are part of a fabric of caring that extends back in history, and will continue on beyond us, embracing whatever we are able to contribute, and adding our gifts to those of its many generations.
Pre-pandemic, Grant and I taught together the Godly Play curriculum, and got to know so many families first through their 4-6 year olds! There is always space at Grace for children, and our own girls have loved literally running through the sanctuary during Family Service, playing cello on special occasions, or coloring quietly. They know Grace is a home to them. We miss our friends at Grace, and are grateful for what it is, and the potential of what it will be for its many communities, and for our City, as we emerge from this time of challenge and grief.

Craig Whitney shares why he and Heidi pledge to Grace: 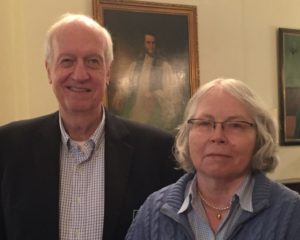 Heidi and I first became members of Grace Church – and of the Episcopal Church – in 1984. Grace has given us so much over the years that we have always felt an obligation to support it in all it does, not only for us who belong to the parish but also for the community beyond. I remember how proud Goldy Sherrill, the Rector who confirmed us, was of the help that Episcopalian, Catholic, and Lutheran parishes were giving to the East Brooklyn congregations that established the Nehemiah housing program, which today is still building homes on city-owned properties for people living in disadvantaged neighborhoods to own and move into. People from Grace continue that kind of engagement today, with Allen Robinson’s encouragement and full support.
Empathy is the human quality behind it. Heidi and I feel the kindness for her that radiates from your faces even on the computer screen in our constricted Zoom services these days, and it is profoundly moving. Empathy on a wider scale is what motivates us all to help neighbors less fortunate than we are, and fellow parishioners when they need help. What makes it possible to keep up our beautiful church, to attract and support our inspiring clergy and our superb musicians, is generosity — as much as we can muster. We make a pledge every year, increasing it when we can, and we are doing that this year. We hope you will, too, if you can. That will help ensure that Grace Church will always be ready to open our hearts to the faith that brings us together and will be here to console and comfort us all when the pandemic is past. Thank you!